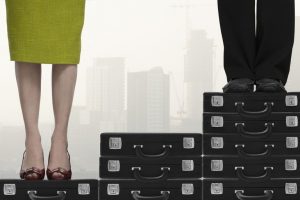 Promoting Inequality in the USA

I’ve handled sexual harassment cases for 25 years. I’m often asked by friends whether the hubbub about sexual harassment and the #MeToo explosion of media interest has run its course. I usually respond by asking what they mean. Will the media stop talking about sexual harassment now that some famous white men in powerful positions in the media and Hollywood have been called out, and fired? Probably not. But it’s not because there’s such deep concern on the part of media moguls and editors for women’s rights or a desire to effectuate real change in our society. It’s not about protecting apparently mute women from salacious white guys with power. It’s just juicy TV. It’s a magazine cover. It’s the next thing to drive ratings and sales. Nothing more.

What’s the bigger picture here? The media suggests that white men in positions of power tend to exercise that power, one way or another, and especially in the area of fondling and propositioning women. For some reason, the media thinks that men who are not white, or who are less powerful than national TV anchors or Hollywood moguls, do this less. At the least, they are excluded from the national conversation. This is bunk. Men who have the opportunity to push the envelope of sexually condoned social behavior in the workplace tend to at least dabble with their ability to titillate themselves though sexual comments, “offensive” behavior and misogynistic practices. Why? Is it because they have power, or money, or they are perverts? For some, these characteristics can be in play and can contribute to bad behavior. But really, do men grope the secretary or the starlet, or the grocery clerk because they have money, or they are in a position of power? I don’t think so.

The truth is more disturbing than the media fictions highlighted by the antics of a few well known men, who happen to have wealth and power. The truth is that in the United States our society promotes inequality. Yes, we promote inequality. We have laws on the books, like Title VII, and most states have sexual harassment statutes, which can be utilized to compensate women who are discriminated against based on their gender, but most women who are harassed never pursue a claim. Most women are taught to just let it go, or feel they probably “asked for it,” or just don’t want to risk retaliation for reporting harassment. Many women don’t have the confidence to speak up at the time of an incident to “draw the line,” clearly and maturely.

We, and I mean men and women alike, place undue emphasis on the appearance of young girls, and then teenage girls, and then young women, and then mature women. We judge women by how they look, and whether they can be “cool” in the face of a bit of male banter, or even a bit of sexual innuendo. And, who doesn’t want to be cool?  Our magazine covers promote the idea that women should be evaluated based on appearance, the same magazines that now run articles about how terrible sexual harassment is in our society. Women are still paid less than men on average for doing the same job. Why? Because women are believed, by men and women alike, to have less value than men at work, and outside of work. It’s sad, but true. Until we as a society change our mindset about the equal value of women in the workplace and outside of it, there will be sexual harassment at work. Nor is this something that gets fixed by “sexual harassment training.” Most employees don’t take such trainings seriously. Often, they are simply online trainings, which are not supervised. What we need is “human being training.” We need to learn the value of each other in the workplace, and outside of it. Until then, while we continue, in a myriad of ways, to promote inequality, while at the same time having a national conversation about how terrible it is, sexual harassment will be alive and well.